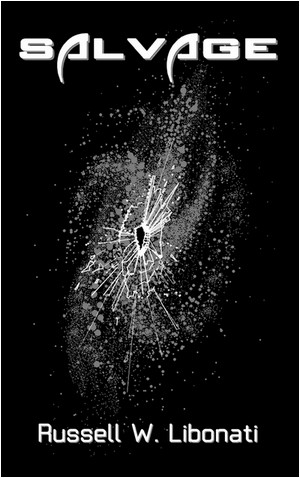 For millennia man ruled the earth, but destiny eventually drove him to the stars. This created two factions; those that stayed and those that left. Between were the many ships and stations that supplied them both and acted as a lifeline. When Captain Metcalf received a distress call from one of those stations, he knew he could not ignore it. He charged to the farthest reaches of colonized space. But the station was not suffering from a malfunction, it was being attacked. If the attackers were still in the system, the decision to help could be a fatal one.

Salvage is the story of Captain Anthony Metcalf and his struggle with that fateful decision, as he battles his fears and an old enemy to keep his business afloat and his crew alive.

Other than faster-than-light travel, faster-than-light communication, and artificial gravity, every effort was made to use hard science. The author also subscribes to the point of view that great science fiction should have a great story first and foremost. The science fiction should only serve as the backdrop against which the story is told. Salvage was written with this philosophy.